This previous Friday we chased the Northern Lights. Didn’t see any fun collisions in the atmosphere but did manage to snap this shot. 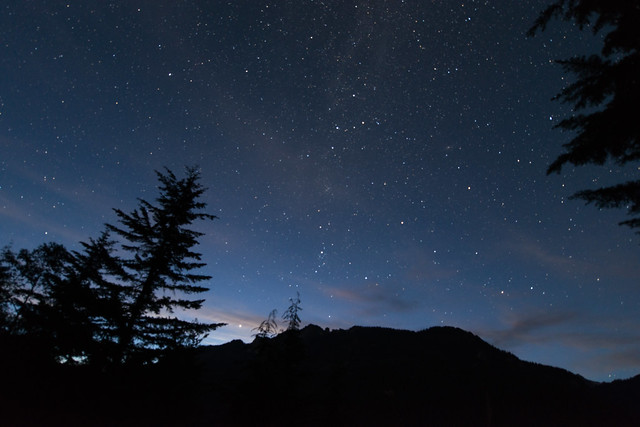 We were pretty spent at this point the Safari portion of our trip was over so what’s the best idea after 10 days of African Massage? (Riding in around bad roads in a land rover)

A quick day hike! After a half day of rest we did the tourist part of Kili on day 11. 3 hours 9 kilometers, and 841 meters of elevation change. Both ways.

Day 12 was sponsored by Advil, Kindle, and Tusker Beer. 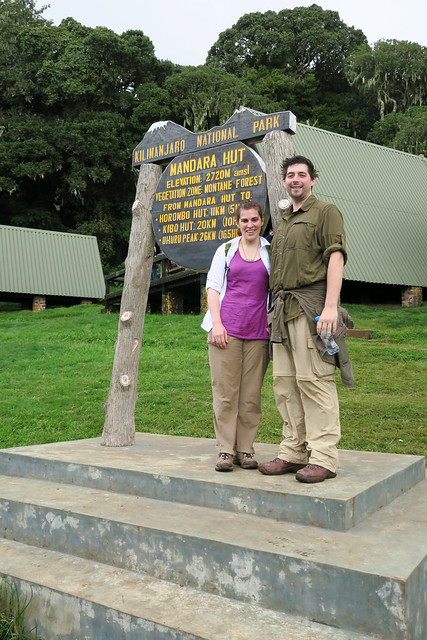 We had a late start to the day breakfast and coffee overrode the need to get back to being Tsetse fly bait. Rounding the first bend into the park we were accosted by a wall of smell that I can still feel lingering in the horrors section of my brain. The smell over rode several senses; it smelt like an elephant had died. That’s because an elephant had died. A few hundred feet later we had found the departed creature. The vultures immediately scattered as we made our way to it.

Uncommon test of true love #128 your travel companion tolerates the smell of a dead elephant long enough for the scattered vultures to return so you can take a few shots of heavy metal album covers.

This pic was worth every putrid minute. 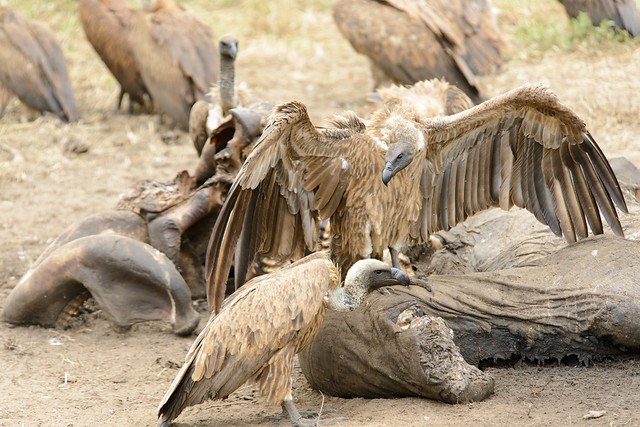 To be perfectly honest there’s no way to talk about this day without cutting right to the chase. We saw elephants attempting to make more elephants.

It started as us hearing three distinct sounds. Sound 1: A large elephant billow that sounded like an elephant fight. Sound 2: Two elephants running and trampling everything in the way. Sound 3: A elephant giggling.

When the two large, giddy, creatures came into view the male was chasing the female continuing to make all manner of noise. We both did a cartoonish double take followed by a *blink blink*. Without being crass the logistics involved were more graceful than I’d have predicted. 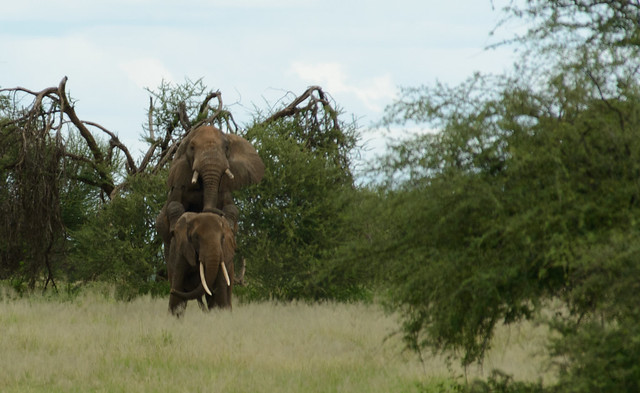 My words will not do this place justice. There’s a reason it’s a World Heritage Site and everyone on the planet is tripping over each other to preserve it. On a lucky day we could have seen a few of all the other large animals we saw on the trip with an exception of some of the cats.

The crater is one of the few places that you can still see wild Black Rhinos. If you go you might see one, une, uno, один, 1.

One being nearly a whole percent of what are left of their population in the wild. Having thought that our luck was used up finding the great migration we had no expectations around seeing a Rhino. Secretly I had harbored hopes that like some of the fickle beasts I’ve attempted to photo one would let us glimpse it then happily turn its butt toward my lens as it walked off into the woods.

Early in the morning we saw exactly this a single black rhino incredibly far off in the distance walking away from us towards thick tree cover. I managed to get a simple profile shot as it turned briefly through the haze. Like a child finding a Unicorn my heart raced as I watched it disappear into the woods.

However, I wasn’t prepared for what would happen next. Over the course of the next two hours we managed to spot not one or two more but NINE more. I might as well be writing that we saw a T-Rex as it’s more believable than saying we saw 10 Black Rhino. Thankfully I have photos to back up the statement.

As if on queue to not be upstaged we also saw our first male lion. 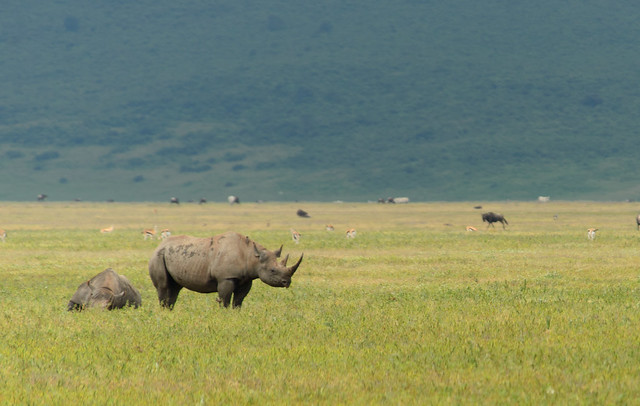 When planning this trip we had to make the decision of seeing the great migration or not. We went early and in the offseason for a number of reasons effectively deciding not to the see migration as a balancing of many factors. It would be too far south and months away so it was far out of our minds that seeing it was even possible.

Sitting in the middle of a million+ GNUs is to oddest place I’ve ever eaten lunch. 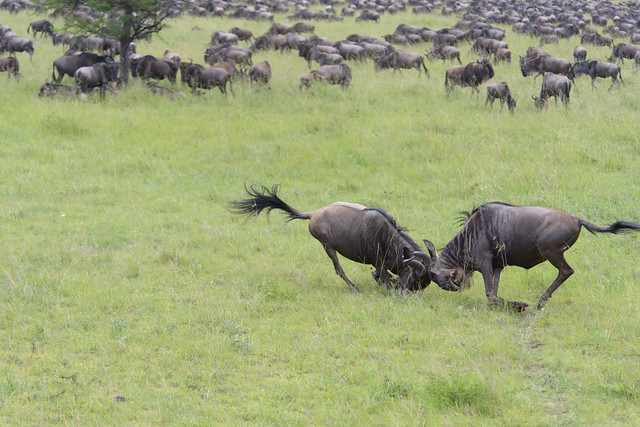 The day started with us boarding a balloon at 6 am to attend a full English breakfast and ended with seeing a trunk slap fight between two elephants. It was by far the most British of days. Oh and a Leopard cub jumping out of a tree…

I can’t but help imagine that somewhere was a man smiling in a safari hat holding a gin and tonic saying “Good Day Sir”! 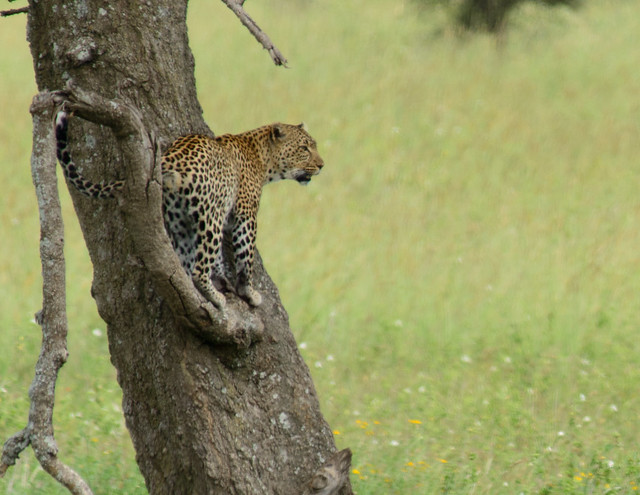 Early in the day..
Amber: “I want you to understand that lions are incredibly rare. We might go multiple days and not see a single lion. We are going to Tarangire to hopefully see the lions that climb trees” 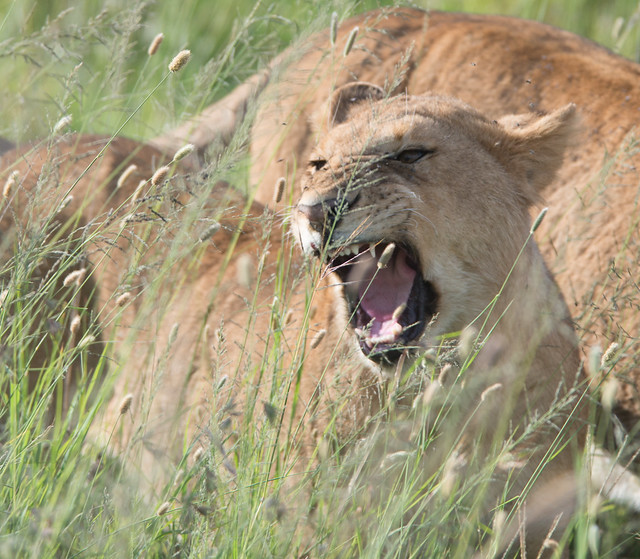 It was at this point the jet lag caught up with us a half day bike ride around town and back to the lake was enough to wipe us both out. The afternoon was spent sleeping and spotting 50 or so different birds next to this baobab tree, which happened to also be full of BEEEEEES. 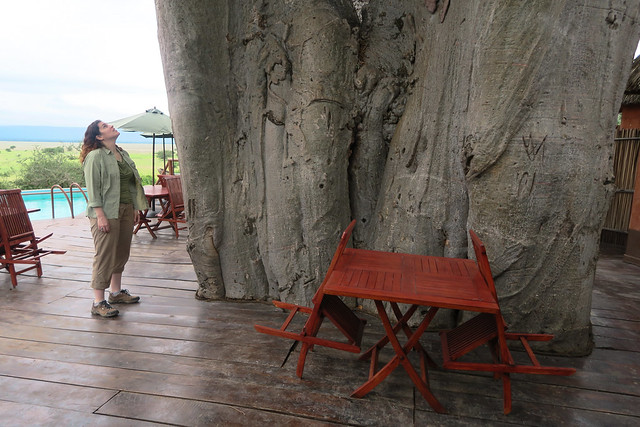 It’s difficult to explain but every creature in the park seemed friendly. Fueled up by Tanzania coffee we continued our adventures in Lake Manyara. Most of the day was spent spotting all manner of smaller bird and animal thanks to our guides inhuman eyes. The day was capped off by being close enough to elephants to touch. 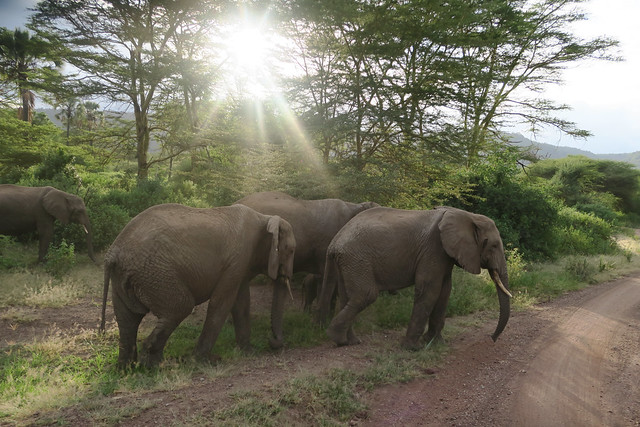